Our festival’s mandate is to promote joie de vivre and extend the reach of French Canadian language and culture throughout the year through artistic, educational, historical and cultural experiences inspired by the voyageur and fur-trade era.

Festival du Voyageur promotes the celebration of Indigenous culture. We have not done enough in the past to strengthen these relationships and as a team we’re changing that!

We are focused on reconciliation by hiring more Indigenous artists, staff and in creating partnerships throughout the year. 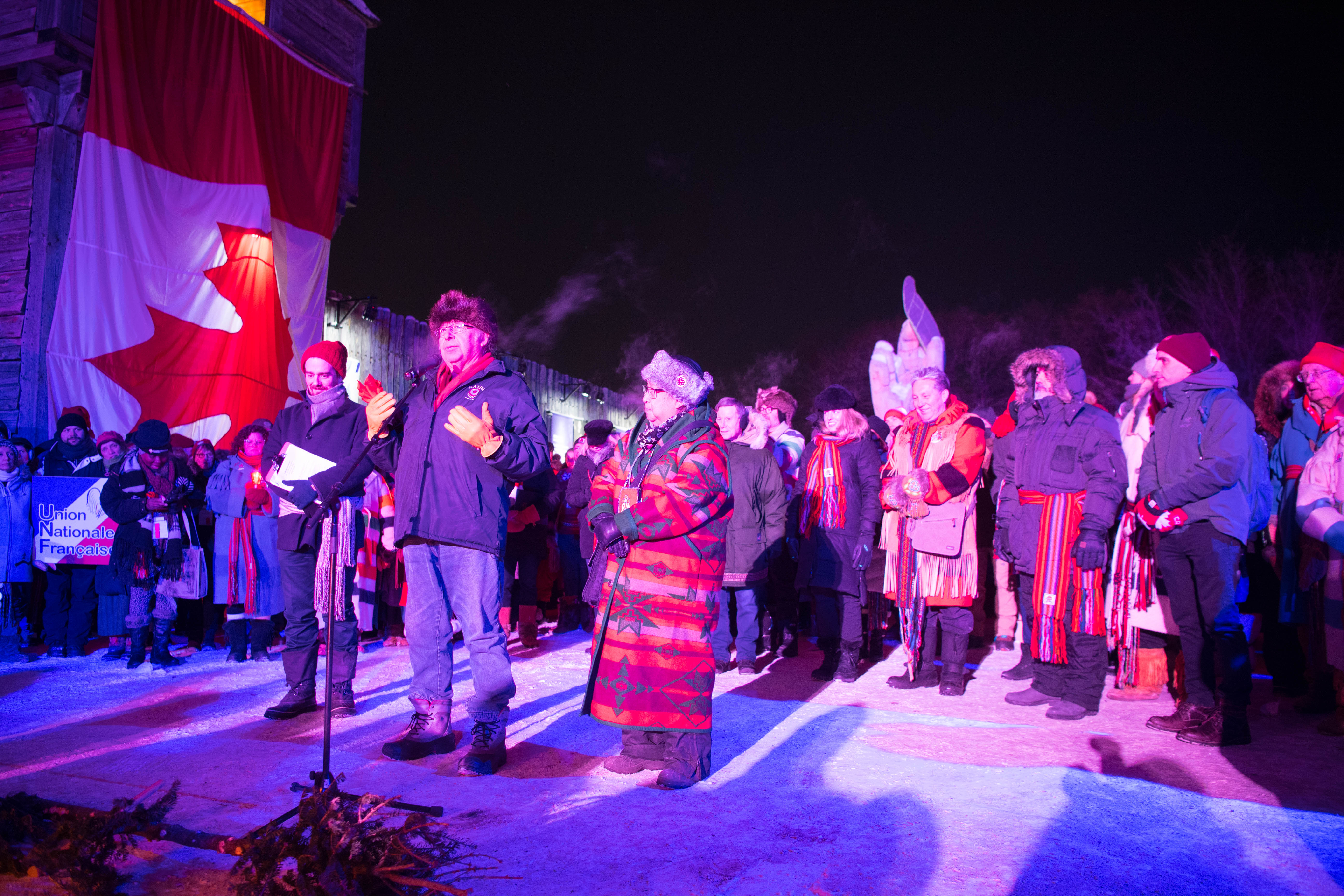 Festival du Voyageur is located on Treaty No.1 territory. We gather by the Red River, on homeland of the Métis Nation, and land of the Cree, Oji-Cree, Ojibwe, Dene and Dakota people.

Because of cultural erosion due to residential schools, the 60’s scoop, and colonial systemic oppression, Indigenous People had their freedom and culture stolen.

Festival du Voyageur promotes the celebration of Indigenous culture. We are focused on reconciliation by hiring more Indigenous artists, staff and in creating partnerships in order to implement Indigenous programing and educational activities into Festival throughout the year.

Treaty No. 1 is a signed formal written document, the first of 11 numbered treaties signed in Western Canada, between the Crown and Chiefs of different First Nations communities. In Manitoba, when Treaty No. 1 was signed in 1871, First Nations people of Manitoba were promised both land and resources. These promises were not honoured. By ignoring their obligations, the government of Canada left generations of First Nations People at a disadvantage in post-colonial society.

WHAT ARE RESIDENTIAL SCHOOLS?

The Residential School System was a network of boarding schools across Canada funded by the Canadian government and administered by Christian churches. There were 130 residential schools across Canada with 14 in Manitoba. These schools took Indigenous children from their homes and cultures and forced them to aggressively assimilate to colonial Canadian Christian culture. Tragically, many of the schools had graveyards due to the number of children who died while in attendance. 4,200 deaths were recorded and in total an estimated 150,000 indigenous children were placed in these schools from 1880-1996.

WHAT IS THE SIXTIES SCOOP?

The “Sixties Scoop” refers to a period in Canadian history when Indigenous children were removed from their families and their communities by child welfare services. Thousands of First Nations, Métis and Inuit children were placed in non-Indigenous foster and adoptive homes in Manitoba, Saskatchewan, and in some cases across Canada and the United States.

In June of 2019, Festival du Voyageur formally commited itself to the long-term process of reconciliation by signing Winnipeg’s Indigenous Accord. The signing of this accord means we are commiting to “formulate and execute action plans that observe the commitments and principles expressed in the Accord for the establishment and maintenance of mutually respectful partnerships with First Nations, Métis, and Inuit peoples”.

Our year 1 goals are the following:

We’re committed to ensuring indigenous artists are well represented in all aspects of our programming.

Through our Canada Life School Program (February) and our Summer School Program (May/June), we are committed to ensuring that our historic programming shares Indigenous perspectives of the fur trade and helps promote understanding and reconciliation.