CELEBRATING THE KINSHIP OF THE FUR TRADE AT FESTIVAL DU VOYAGEUR 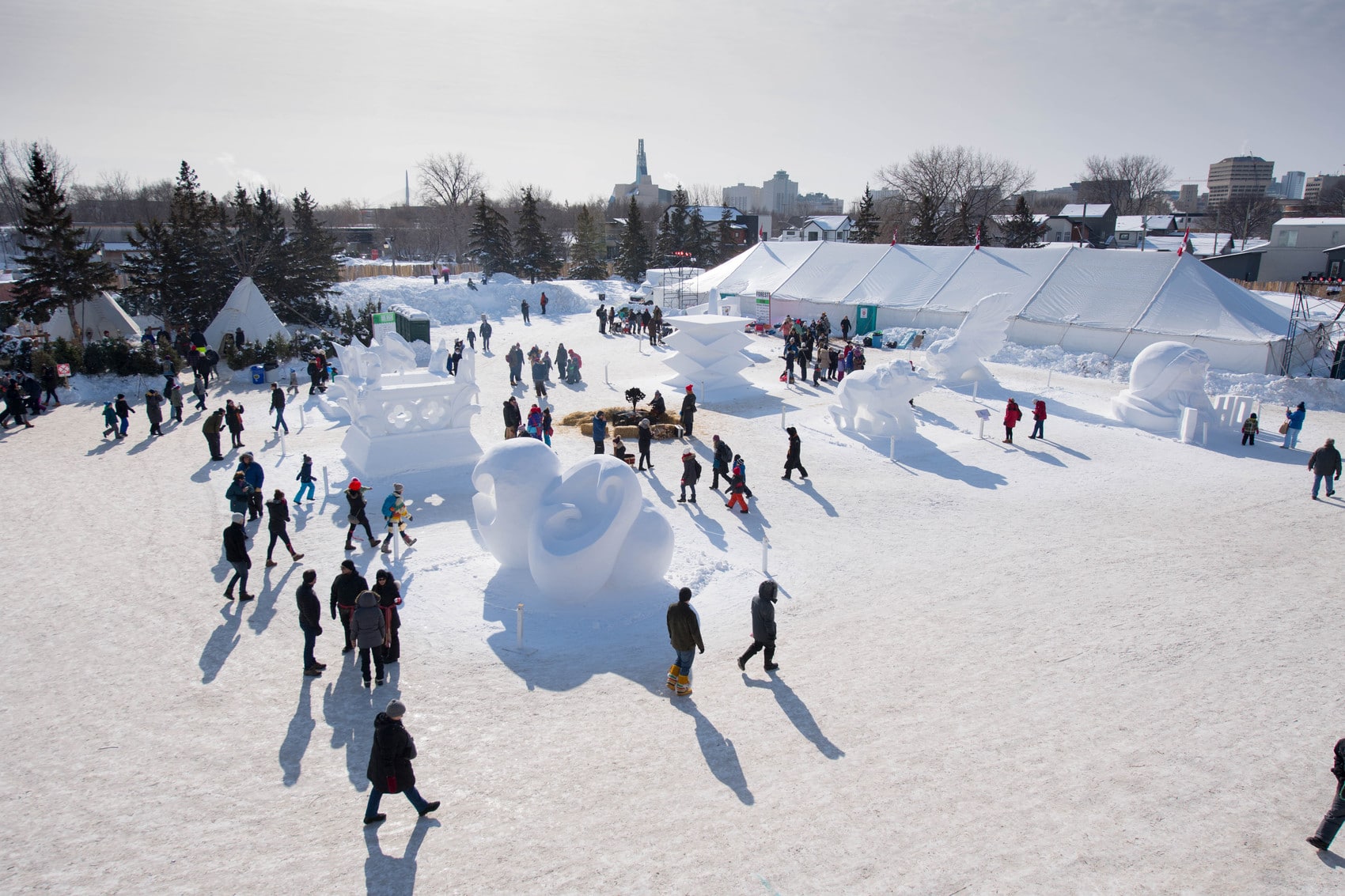 Saint-Boniface, MB – Festival du Voyageur kicks off February 14 with a first weekend packed with the festival staples of maple taffy, kitchen parties, jigging, snowshoeing, and capot-adorned festivalgoers. This year, the festival is welcoming a huge increase in Indigenous programming, new ecological initiatives, and the largest tent in the history of the festival.

As festivalgoers walk into Voyageur Park, they’ll be greeted by the seven sculptures in our International Snow Sculpting Symposium, which brings in sculptors from around the world and close to home. Teams arrived from France, the United-States, the United Kingdom, Argentina, and Canadian teams from Saskatchewan, Steinbach and Peguis First Nation.

Wayne Stranger, the father of Jordan Stranger who designed the branding for this year’s festival, is a bronze sculptor who will be sculpting snow for the very first time. His sculpture, “Return from the Mountain,” depicts a time when the buffalo roamed free before European contact. The Elders say that in order to protect the teachings of the buffalo, they went into the mountain.

Years have passed and the buffalo had seen the people wanting to learn the ceremonies and hear the prayers again, so the buffalo came back to the people, returned from the mountain.

This is a Sundance story shared at Wayne’s very first Sundance ceremony 30 years ago. He created the sculpture in bronze while attending the University of Manitoba Fine Arts Honours program in 2003.

Standing in equal weight to the International Snow Sculpture Symposium will be an immersive sculpture that celebrates the voices of our Indigenous ancestors by Jaime Black, founder of the REDress Project. The snow and ice sculpture presented by Air Canada has entrances pointing in the four directions and ice with fabric representing both MMIW and their spirits.

At 6:45 p.m. on Friday, February 14, FOWLER, a local bilingual artist will be the first to play the stage in the brand new Bell MTS Red River Tent. With the tent now nearly double the size, Festival du Voyageur will welcome acts like Royal Canoe, Ariel Posen, Boniface, Don Amero, Sierra Noble and more on the first weekend.

This year, Festival du Voyageur is hosting bands in the Maison du Bourgeois in the Fort Gibraltar, called Le Foyer for the duration of the festival. It will be the place to go if you’re looking for a cozy, house-concert environment. Mélanie Bédard, many Francophone families, Kenzie Jane, Greg Arcade, and many more will play Le Foyer throughout the festival.

With the addition of the new Bell MTS Red River Tent and Le Foyer, the capacity in Voyageur Park has increased by 18%.

NEW ADDITIONS TO THE SIGHTS OF VOYAGEUR PARK DURING FIRST WEEKEND

On Saturday, February 15, festivalgoers will be able to see the process of tanning an animal hide to produce leather. From 10:00 a.m. to 6:00 p.m., Gerra Lynne Cochrane will be working in the Winter Trading Camp where attendees can observe and ask questions.

Not new to Festival du Voyageur but with a new name, the Fayt a la min Workshops (previously the Voyageur Apprentice Workshops), is the place to go to learn a hands-on craft and take something home with you for free. Fayt a la min is the Michif name for ‘made by hand’. Attendees will learn crafts like beadwork, tinsmithing, paper marbling, Indigenous-style pottery, soapstone carving and much more.

Indigenous art, stories, languages and music will be front and centre on Louis Riel Day at Festival du Voyageur.

While shopping the Indigenous wares, festivalgoers can take in the sights and sounds of artists including Asham Stompers, Burnstick, Don Amero, Sierra Noble with Kadanse, and Don Ross with Calum Graham.

In the Forest Tent, elders will be sharing Michif and First Nations stories. Lorraine Coutu, Agathe Chartrand, and June Bruce are three Elders from St. Laurent, MB, that do storytelling and family friendly activities in Michif. First Nations elders, Barbara and Clarence Nepinak, will be leading an intimate storytelling activity in English.

Starting at 4:00 p.m., Jaime Black, a Métis artist based in Winnipeg, will be performing a live art piece in Voyageur Park. Jaime’s work centres around themes of memory, identity, place and resistance.

In hommage of Louis Riel, L’Union nationale métisse Saint-Joseph du Manitoba, founded in 1887, invites you to participate in a flag procession . The procession will start in the Manitoba 150 Forest Tent and make its way inside Fort Gibraltar where they will raise the Métis flag.

Download the Festival du Voyageur app on Apple and Android to view the full festival programming.