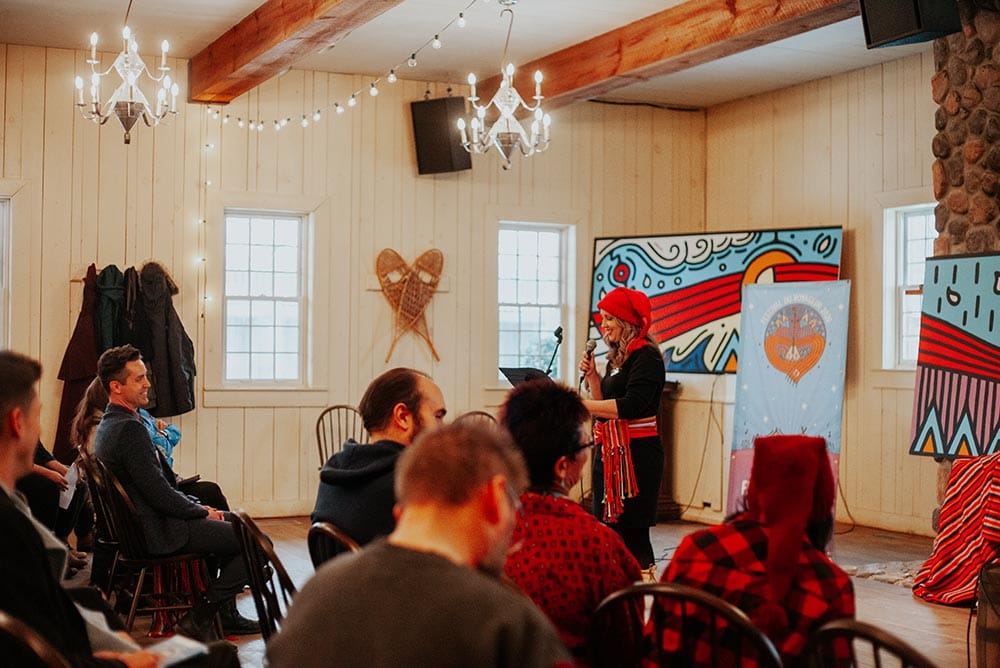 Saint-Boniface, MB – Since the conclusion of last year’s 50th anniversary milestone, Festival du Voyageur has focused on creating a vision for its next 50 years. In 2020, the festival is focused on defining its identity in the community, creating memorable experiences for festivalgoers and evolving into a modern, socially responsible festival. Along with festival staples of traditional music, maple taffy, snow sculptures, and a whole lot of jigging, Festival du Voyageur 2020 is bringing new ecological initiatives, a major increase in Indigenous programming, and the biggest tent in the history of the festival.

“Festival du Voyageur is a reflection of our present-day community and our community during the fur trade era. The fur trade would not have been possible without a deep kinship between Indigenous peoples and the voyageurs.” says Darrel Nadeau, executive director of Festival du Voyageur. “This year, our festival as a whole is a true reflection of this kinship that makes up our history, and it is with this spirit we will carry forward into the future.”

The 2020 festival logo was designed by Jordan Stranger, an Oji-Cree visual artist. The tipi in the center represents home with the four directions and the sacred hoop on the front. The Fort Gibraltar stands welcoming with open arms, and the sash embraces the tipi, fire, and nature – almost in the shape of a heart.

“Nobody is bigger than anyone, and we need to all be able to work together,” said Stranger. “Having that history at Festival – the fort itself with the fur trade and having First Nations as a part of it. They all operated together, and that’s the way it should continue.”

Stranger is also painting one of the stage backdrops along with Dee Barsy as a part of the festival’s visual arts programming.

BIGGEST TENT IN THE HISTORY OF THE FESTIVAL

The Bell MTS Red River Tent will be the largest and most energetic venue in the history of Festival du Voyageur. With nearly double the space to jig around, the festival will be able to welcome over 1,000 people to hear their favourite local band or discover their next favourite. With that, on Thursday, February 20, Festival du Voyageur is welcoming Canada’s Walk of Fame and Charlotte Cardin, Québec pop star and top 4 finalist on the television show La Voix, Québec’s version of The Voice.

The University of Manitoba’s UMEARTH program will be studying the way the festival heats its tents with the ultimate goal of reducing energy consumption in the future.

For the 2020 festival, Festival du Voyageur is partnering with two Manitoba breweries, Fort Garry Brewing and Farmery Estate Brewery. The two breweries will be working together to provide Manitoba-made beer and other beverage selections to festivalgoers.

A partnership between two breweries is the first of its kind at a major festival in Manitoba. Two local breweries joining forces will give visitors a larger selection of products to choose from during the festival. Festival du Voyageur will also be working with both breweries on co-branded products and promotions that will be widely available in the lead up to the winter festival.

To view full 2020 programming and more information about Festival du Voyageur 2020, download our mobile app available on Apple and Android.

Voyageur Passes, 10-6 Passes, and Single-Day Tickets are available on heho.ca and at the Festival du Voyageur office at 233 Provencher Blvd.