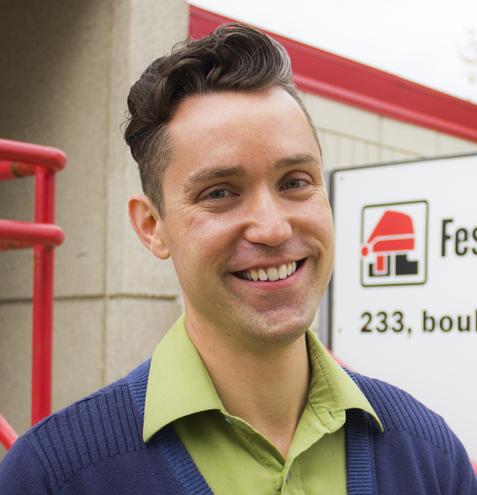 The Festival du Voyageur has the pleasure of announcing the hiring of Darrel Nadeau as its new Executive Director.

“I am honoured to have been named Executive Director of Festival du Voyageur, a non-profit organisation that is indispensable to the Franco-Manitoban culture,” says Mr. Nadeau. “I look forward to taking up the reins and bringing my experience, my passion and my energy to the festival for years to come.”

Born in La Broquerie, Manitoba, Darrel Nadeau grew up on the paternal Nadeau dairy farm. It is in this small yet proud francophone community that Mr. Nadeau, surrounded by his large family, was initiated to Franco-Manitoban traditions as well as the family values and beliefs that he still takes to heart today. Whether it be the “réveillon”, “tourtière”, “six-pâtes”, leg wrestling tournaments or simply a spontaneous family reunion on a Sunday afternoon, Mr. Nadeau considers himself lucky to have a family that personifies “joie de vivre” on a daily basis. Beyond his core values, Mr. Nadeau has a master’s degree in business administration, is a Certified Management Accountant and has 6 years of experience as a Manager in Finance and Administration for a charitable organisation.

“I am extremely happy to welcome Darrel Nadeau to the Festival,” remarks Simon Normandeau, President of the Board of Directors of the Festival du Voyageur. “His wealth of skills and experiences will be as useful as they are precious in his role as Executive Director. We wish him a great deal of success in the years to come.”